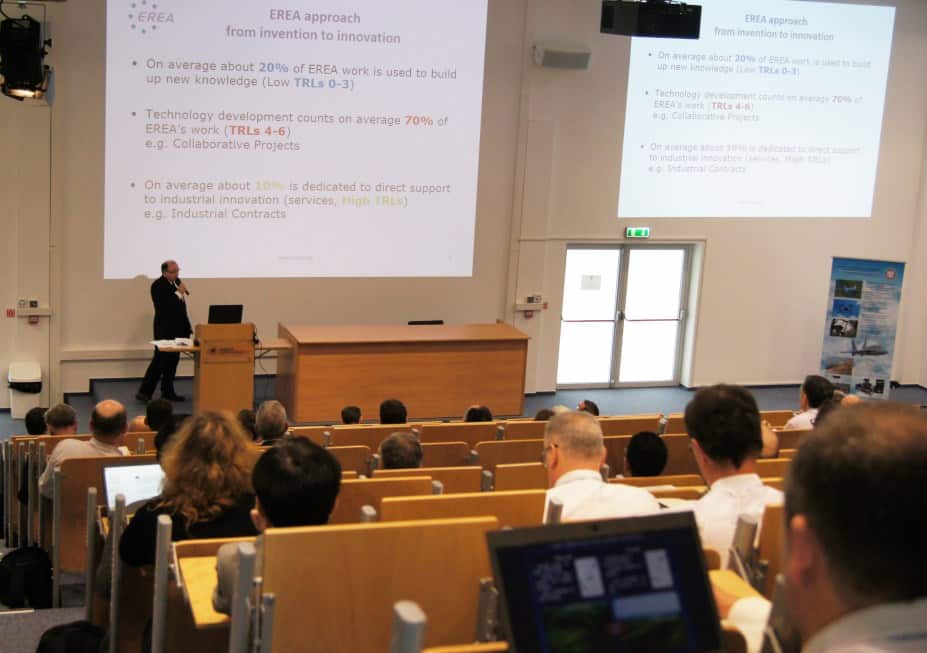 In the fall of 2017, EREA was invited to present the Association to various European aeronautics-related conferences, the first one being the 7th International EASN Conference entitled “Innovation in European Aeronautics Research”, hosted by the Institute of Aviation (ILOT) on the 26th – 29th of September 2017. The event attracted around 320 participants from 20 different countries. The speakers presented recent developments and the state-of-the-art research from areas of aeronautics and astronautics such as: Innovative Approaches in ATM/ATC, Structural Aspects in Aircraft Design, Wing Optimization, Space Physics, Space Robotics, Flight Control, Future Challenges of UAS, among others.

During the event, interesting plenary lectures were delivered by the world’s most outstanding personalities of science and academia. One of them was Mr. Bruno Sainjon, EREA Chairman, who presented the Association’s goals, activities and objectives for the future in his key-note speech entitled “EREA – a major contributor to the implementation of ACARE SRIA”. Mr. Sainjon showed the examples of technology transfer conducted successfully by the EREA research establishments as well as indicated the multidisciplinary character of the research performed by its members. The presentation outlined the plethora of research infrastructures for aeronautics owned by its REs and mentioned the role of EREA in maintaining and improving the competitiveness of the aeronautics industry. EREA’s flagship JRI, the Future Sky programme was shown as an important initiative able to tackle the contemporary challenges that hamper the growth of the aviation sector. Strong links with all stakeholders were also underlined in Mr. Sainjon’s key-note lecture.

This speech was later followed by the Future Sky session, chaired by Mr. Josef Kaspar, the FS Coordinator who opened it with a general overview of the Future Sky programme. Dedicated presentations on Future Sky topics: Safety, Noise and Energy, were introduced by speakers from ONERA and CIRA.

EREA had a booth in the exhibition stand, where the participants could learn more about the Association from the brochures, facts & figures leaflets and the last edition of the EREA newsletter.

In a similar way EREA also participated in the CEAS Conference organized in Bucharest on the 16th – 20th of October, in which the keynote speech was given by the EREA Chair, followed by a workshop on Future Sky, chaired by Mr. Josef Kaspar and with speakers from NLR, ONERA and CIRA for the dedicated presentations. CEAS Conference had a broad participation from all over Europe, counting more than 430 registered attendees.

Likewise, EREA was invited to participate at the 7th European Conference for Aeronautics and Space Sciences conference (EUCASS 2017), which took place in Milan from the 3rd to the 7th of July and gathered about 600 participants. This conference was an additional opportunity for the EREA Chairman to give a plenary lecture during a special session dedicated to the networking and collaboration in aerospace research in the EU.

All conferences gave the opportunity to present and discuss, with a broad spectrum of aviation stakeholders, EREA and its participation in the preparation of the future European aviation research.

Picture: Key-note speech by Bruno Sainjon at the EASN conference